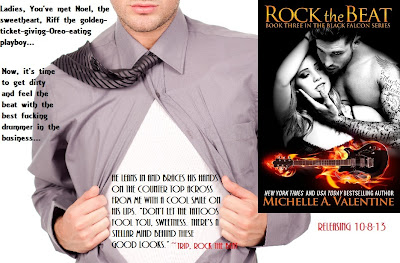 Add it to your Goodreads!

Posted by Unknown at 3:58 PM No comments:

You guys, I'm falling in love. Every time I start a new book I find myself falling in love with the leading man. First Noel...then Riff...now Trip. I love the banter between these two. This love story is far from insta-love. These two have to work for it and overcome some personal issues together. Trip, and his Dr. Phil-wanna-be ass cracks me up. This man thinks he knows it all and isn't afraid to say what's on his mind. Like the rest of the Black Falcon men, he's used to scoring women easily and it's fun to watch him work through the challenge and realization that not every woman is willing to drop their panties on command for him.

I know you all have been waiting for this one for a long time. Planning the Naughty Mafia Rocks Vegas took up most of my time for the last two months, and my writing really suffered. Please just know I am working tirelessly to get this story ready for a late September/early October release like I stated before. Right now the story is flowing and, fingers crossed, I can make my September 10th deadline to my editor.

Thank you all for sticking by me and the Black Falcon guys. I love each and every one of you to tiny bits and wouldn't write if you all still didn't want to continue this journey with me. I have a few non-Black Falcon related contemporary, New Adult stories coming up too and I hope to share more about those in the coming months. But, for now, here's the beginning of chapter one of Rock the Beat.

This novel will be dual point of view like Rock My Bed and Rock My World. I can't wait to share the rest with you! 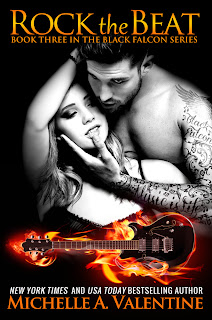 Trip needs a break from the crazy rock-and-roll lifestyle he’s been living for the past few years. With his Black Falcon band mates settling down with marriage and babies, Trip peruses an investment opportunity in motocross, something he’s always been passionate about. Hiding his celebrity status, Trip infiltrates the new business posing as a dirt bike rider training for the X-Games. The only obstacle is the owner’s daughter, Holly. She’s a real ball bustin' Ice Queen, and she’ll do whatever it takes to make the deal fall through. Trip soon discovers that winning over his new enemy is the key to gaining a partnership in Mountain Time Speed Track.

Knowing he’s the expert on getting laid, Trip ropes Holly into becoming his ally by helping her score a date with the man she’s crushing on. The problem is, the more time Trip and Holly spend together, the more they uncover the undeniable attraction between them. Soon they both realize that even the best laid plans go to hell when you find you’re falling in love with the enemy.


**Book THREE in the Black Falcon series. Can also be read as a stand alone novel.**

Posted by Unknown at 9:46 AM No comments: